This is the defining book on Character Analysis.
Written by Christopher Fettes: A Peopled Labyrinth was published by GFCA in September 2015, and has been bought worldwide ever since, by those seeking in-depth understanding. It provides a thorough explanation and interpretation of the method of Character Analysis developed by Yat Malmgren, out of Rudolf Laban’s work. 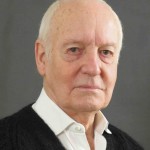 The Laban-Carpenter Theory of Movement Psychology, adapted and brought to completion by Yat Malmgren, fully described and interpreted by Christopher Fettes.
Hard-back edition: 360 pages, full-colour.
The Theory described in four parts: The Components; The Inner Attitudes; The Externalised Drives; The Confluence of Externalised Drives. Complete with extensive commentary by the author, illustrated by copious examples: with diagrams, biographies, bibliography and a foreword by Colin Firth. 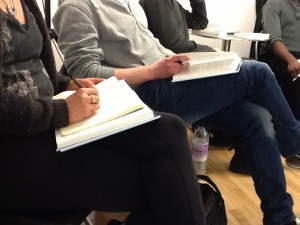 The book in use

The launch of this book marked the completion of 4 years of intense work that was designed to bring into being a long overdue, thorough and complete analysis of the theory. It will prove invaluable as a tool for future students, and serve to preserve this extraordinary work for generations to come. 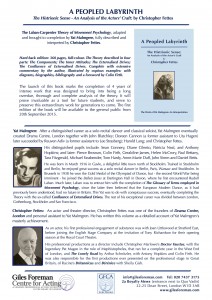 Information about the book

For more information on the work, click on the links below:

Simon Callow speaking about the book, Christopher and Yat – in advance of the NYC book launch.