For news and updates about Group 2, please see our Studio and Alumni news

& at the GILES FOREMAN CENTRE FOR ACTING 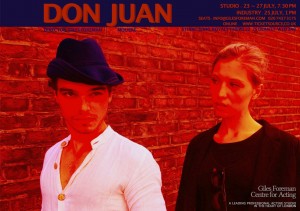 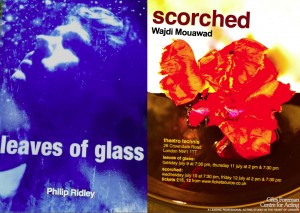 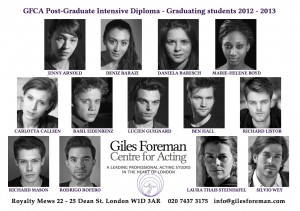 JENNY ARNOLD
Jenny founded the performing duo The Beauty and His Beast, and its first showing led to a role in the rock opera Hyde. She moved from her hometown, Bern in Switzerland, to study on the 1-year Post Graduate Intensive Programme (PGIP) course. Her most recent role was the Leader of the Phoenician Women in Phoenician Women.

DENIZ BARAZI
Prior to this course, Deniz studied A-Level Performing Arts at Acland Burghley Arts College. She also gained a 2.1 B A Degree in English Literature and Drama Studies from Brunel University.  Last term at the GFCA she played Sharon in Sugar and Spice.

DANIELA BARESCH
Daniela studied acting for two years before she came to London. She took a one year intensive film-school programme, and has danced from an early age. She has worked in diverse genres, including Die Heilige Johanna der Shlachthof at the Burgtheatre, and Singing in the Rain, as well as short films. Her most recent role was Antigone in Phoenician Women.

MARIE-HELENE BOYD
Marie-Helene is British, has lived in the UK and throughout Africa – she is bilingual in English and French. She completed the Foundation ATCL Acting diploma at GFCA in 2011 before the PGIP course. Stage experience includes roles in Uncle Vanya at the Roundhouse, Electra at Theatro Technis, Darkness in Mind for Jolley Productions and most recently, Carol in Sugar and Spice. Spotlight page

CARLOTTA CALLSEN
Carlotta joined the Circus Mignon company at the age of seven, and went on to perform with them for several years. Later she appeared in several amateur productions in Hamburg, Germany. In 2011 she moved to New York and began professional acting training at the William Esper Studio.  Her most recent role was Jocasta in Phoenician Women.

BASIL EIDENBENZ
Before this course, Basil spent most of his time in Switzerland, where he trained at the European Film Actor School, and starred in several feature films and a daily TV series Best Friends, that ran for three seasons over three years. His most recent role was Tiresius in Phoenician Women.

LUCIEN GUIGNARD
Lucien was born in Lausanne, Switzerland. As a teenager he acted in short films, and studied theatre, violin and dance with dancers from the Béjart Ballet School, Lausanne. He left Switzerland to start his professional career as an actor in Paris. His training led to him meeting Giles Foreman, and deciding to join the PGIP course, while filming a leading role in the French feature film Chaos. His most recent role was Polineices in Phoenician Women.

BEN HALL
Ben has been with the studio for two years and is currently on the PGIP course. He grew up in Norfolk and moved to London aged 18 as a painter, and through exploring what the city had to offer, discovered acting. He has appeared on stage in various plays including Salome by Oscar Wilde, and recently, John in Sugar and Spice. His most recent role was the Messenger in Phoenician Women. He also has experience in short films and voice over work.

RICHARD LISTOR
Richard studied theatre at Bristol University, and has performed in a number of projects, stage and screen, both student and professional. Last year Richard produced and acted in a multilingual production of Strindberg’s Easter. He then started his training on the PGIP course at the GFCA. His most recent role was Creon in Phoenician Women.

RICHARD MASON
Richard has been a member of GFCA for 3 years. In this time he has been in a number of classical plays including Oedipus Rex at the Arcola, playing Tiresias, and contemporary parts such as Steven in Wasted and recently, Steve in Sugar and Spice, both directed by Alex Israel. His most recent role was Menoeceus in Phoenician Women. Richard also has experience in short film and voice-over work.

RODRIGO ROFERO
Rodrigo was born in Mexico City. He was a child-actor on children’s television, and at 17 decided to do an exchange year in Germany, leading to a BA in Media-Management/Psychology in Cologne. Following studies at the New York Film Academy in 2010, he took on roles in Verbotene Liebe (Forbidden Love) on national TV in Germany, short films in Spain and Germany, and is now on the PGIP course. His most recent role was Eteocles in Phoenician Women.

LAURA THAIS STEINHöFEL
Laura trained on the PGIP Actor/Director option at GFCA. She studied directing at the Mozarteum of Salzburg, Austria and was invited to the Young Director Festival at Thalia Theater Hamburg with her diploma project Parzival by Tankred Dorst. She worked as assistant at Theater Quartier in Salzburg, and at the Neumarkt Theater in Zürich. Her most recent role was Jocasta in Phoenician Women, and she directed the production of Scorched.

SILVIO WEY
Silvio grew up in Switzerland. After abandoning a career as professional skier he completed an MA in Music (Classical Percussion) in 2006. After a 3-year Acting course in Zürich, he moved to London for the PGIP course. Credits include: Doll’s House (GFCA), Time of my Life, God of Carnage (EFAS Zurich), Tales of Hoffmann, Barbiere die Sevilla, Guillaume Tell (Zurich Operahouse), and recently the short movie Bitte wenden, nominated for Swiss Cine Tour 2013. His most recent role was Oedipus in Phoenician Women.