Character Analysis: Devised for actors, directors and others wishing to learn and then explore in-depth the technique developed initially by Rudolf Laban and his assistant William Carpenter, and later completed by Yat Malmgren and taught by Christopher Fettes, founders of Drama Centre, London.

Having further developed the teaching in collaboration with Christopher Fettes and others during the last seven years, Giles Foreman is now a leading contemporary exponent in the UK and across Europe. He leads the workshops along with expert colleagues.

The workshops involve the progressive unfolding of the constituent parts of the technique, followed by opportunities to embody what has been covered through practical exploration and in acting exercises. 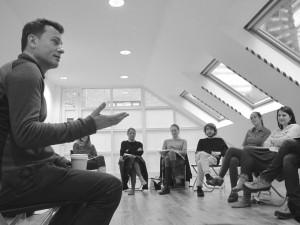 MORE INFORMATION
The technique is based on the psychological theories of Carl Jung (Sensing, Thinking, Intuiting and Feeling) and the work of Rudolph Laban. Laban was the architect of European Contemporary Dance who essentially conducted an extraordinary comprehensive analysis of human expression

Yat Malmgren recognised that this would prove to be a powerful tool for the actor and went on to complete Laban’s theory. He extended Laban’s ideas by creating a psychological typology which brings together Laban and Stanislavsky. Inner motivation and outer expression leading to the detailed and accurate construction of character.

This work was placed at the heart of Yat’s original acting studio in London and later at the Drama Centre London. The technique is familiar to all the students of Yat including Sean Connery, Anthony Hopkins, Colin Firth, Helen McRory, Tom Hardy, Michael Fassbender, Simon Callow and all the many accomplished artists taught over the course of 50 years work.

A series of four Intensive 4-day workshops devised for those wishing to understand and then explore in-depth the technique. Taught by the leading contemporary exponent in the UK and across Europe, Giles Foreman; and expert colleagues, in London – and also in major cities across Europe and USA

The book A PEOPLED LABYRINTH written by Christopher Fettes is in stock; available for visitors to our studio in London, and from major bookshops including French’s Theatre bookshop, and via Amazon.

Fee £350 per workshop – £1,400* in total
£100 deposit to reserve a place, instalments possible*.
Here is a Part-time STUDENT REGISTRATION form to complete, if you’d like to join us. 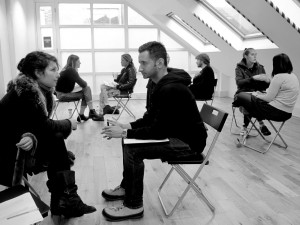 “I found the Giles Foreman workshop illuminating and inspiring. Very challenging at times, but always great fun. Despite having gone to drama school, it was the first time I was given a thorough, incisive insight into the inner and outer workings of the human personality.
No longer a case of intuitive guessing and trial by error – work on a character became a reliable and exact breakdown of the innumerable aspects that apply to each and every one of us: how we sense, think, intuit and feel; how the emphases and combinations of these ‘mental factors’ affect what type of person we are, and the way we tick and relate to the world and the people around us; how all this is coloured by each character’s specific, individual background, and how our outward expression is a direct reflection of our inner state.
This course gave me a new, exciting and intricate vocabulary which I can apply to analyse not only every character I am called upon to portray, but to every person I see! Perhaps the most important thing for me, though, was to find out how I myself tick, not only for self-knowledge, but to clearly see the work I have to do as an actor to change from what I am as a person to the character I am playing.” DC (Munich Workshop) 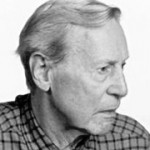 Yat Malmgren [pictured] was one of the great solo artists of European modern dance and later became a legend in British actor training, having been the creator of the Laban-Malmgren System of Character Analysis.

Yat initially taught at a small studio in West Street, off Shaftesbury Avenue in London, and became the acting guru of Sean Connery. He was invited by Lawrence Olivier to work at the fledgling National Theatre and later taught a young Anthony Hopkins at the Royal Academy. He went on to found the Drama Centre, London which was created around his work and which has subsequently produced some of the greatest names in British and world theatre and cinema.

For more information on Yat Malmgren and what some of his now famous students had to say about his method, follow the links below:
Wikipedia
http://www.guardian.co.uk/Archive/Article/0,4273,4432581,00.html
(Colin Firth Article) Yat Malmgren